Welcome to the Rexford, the most luxurious hotel in town. My internship is a dream come true – until I walk in to my first meeting and discover my one-night stand at the head of the boardroom.

Controlling billionaire, Dominic Rexford: CEO – and the man I was secretly hired to seduce.

Now, I just want to keep my head down and stay out of trouble, but Dom has different plans.

He wants a repeat of our wild night together – and he’ll do whatever it takes to get me back between those 700-thread count sheets.

Lola Darling is a romantic with a naughty side. Texas born and raised, she has met a few Mr. Wrongs and is having fun looking for her Mr. Right.

She can be found at her laptop, daydreaming of dirty talking men in well-fitted suits or in the bath enjoying a glass of wine.

Chasing Winter Cover and Synopsis Reveal!
Chasing Winter
(the fourth and final book in The Four Seasons Series)
by Alora Kate
Genre: New Adult – Romance
Coming Soon!!
**Release Date: July 20th**
@ AuthorAloraKate
Add to your Goodreads TBR
Join the Facebook release day Party!
Synopsis:
Everyone has secrets but some are worse than others are. Some people are ashamed of their secrets. Some people are terrified of how others will react to their secrets. Chase and Winter both have secrets. They both have demons and a past that haunts them. This is the final book in The Four Seasons series and we finally get to meet Winter and Chase. How will they deal when they learn about each other’s pasts? Will Chase still continue to chase Winter?
The Cover!! 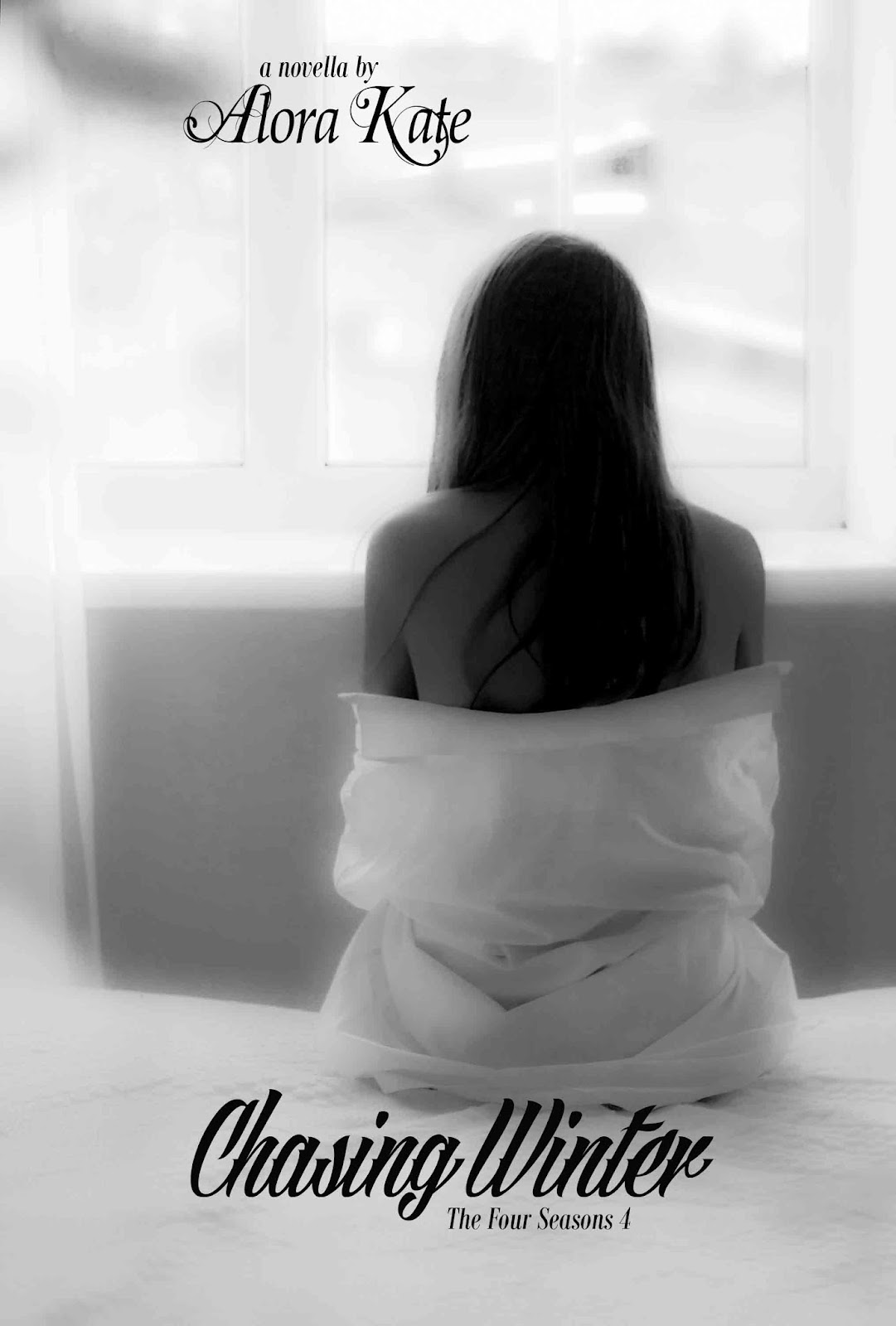 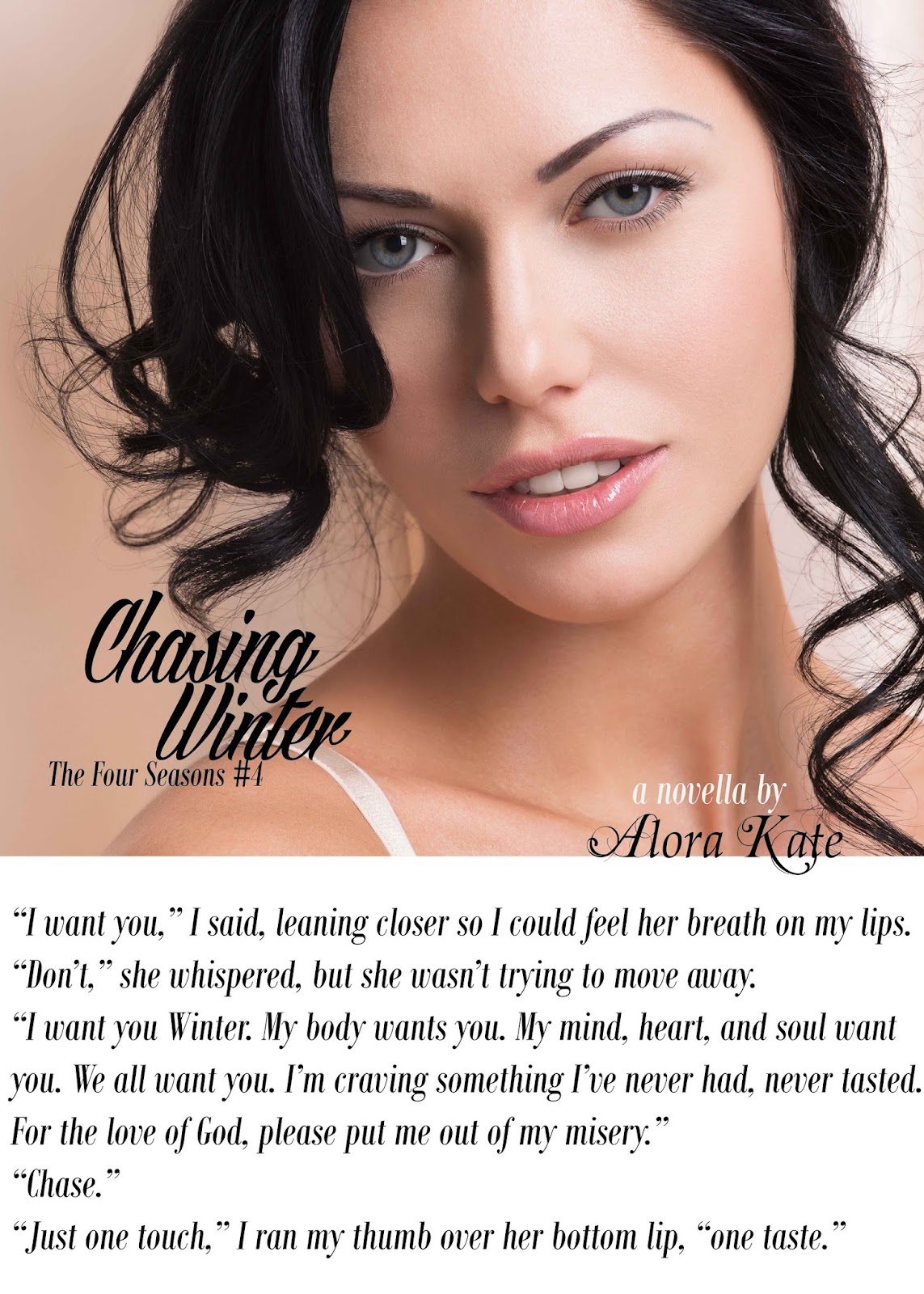 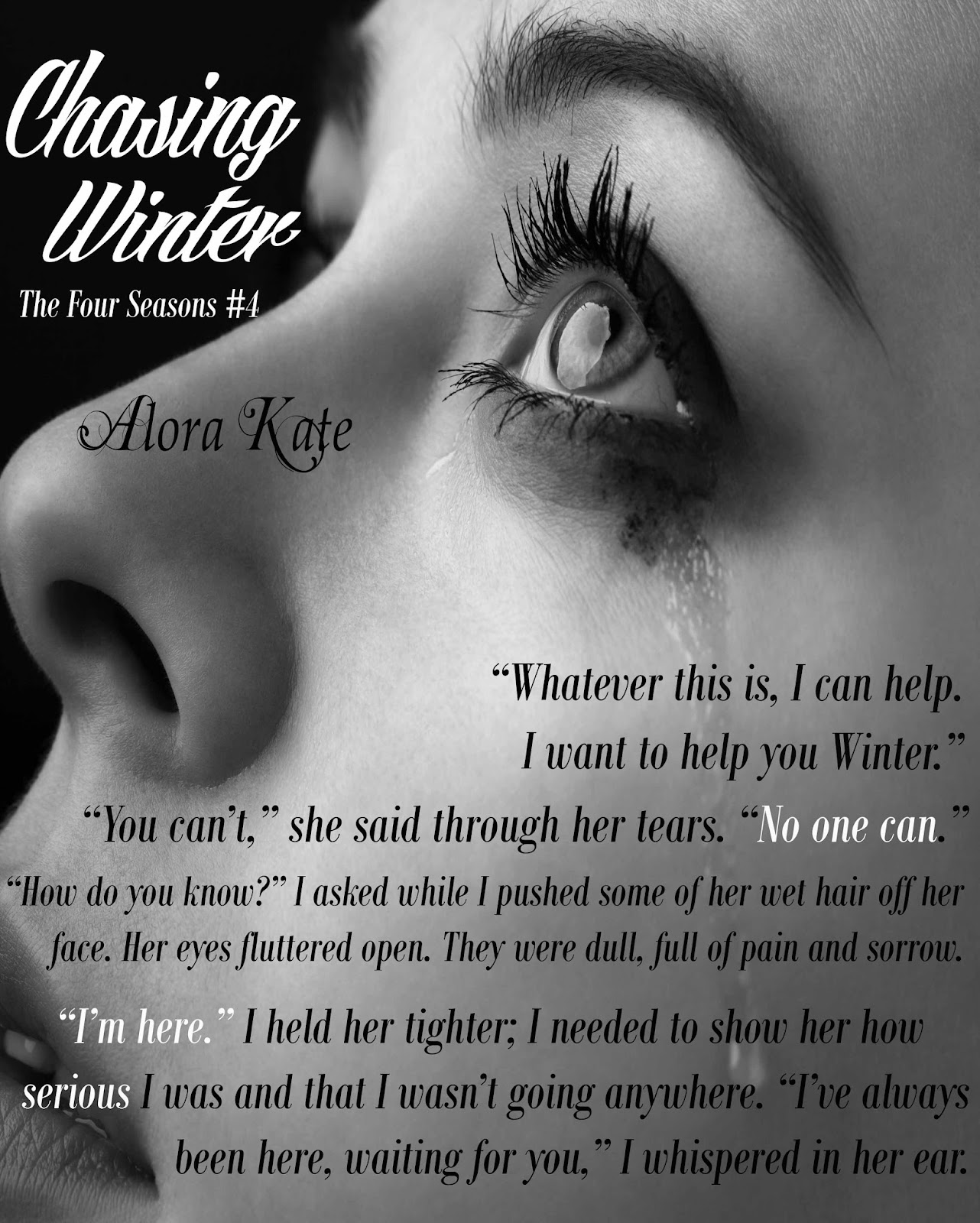 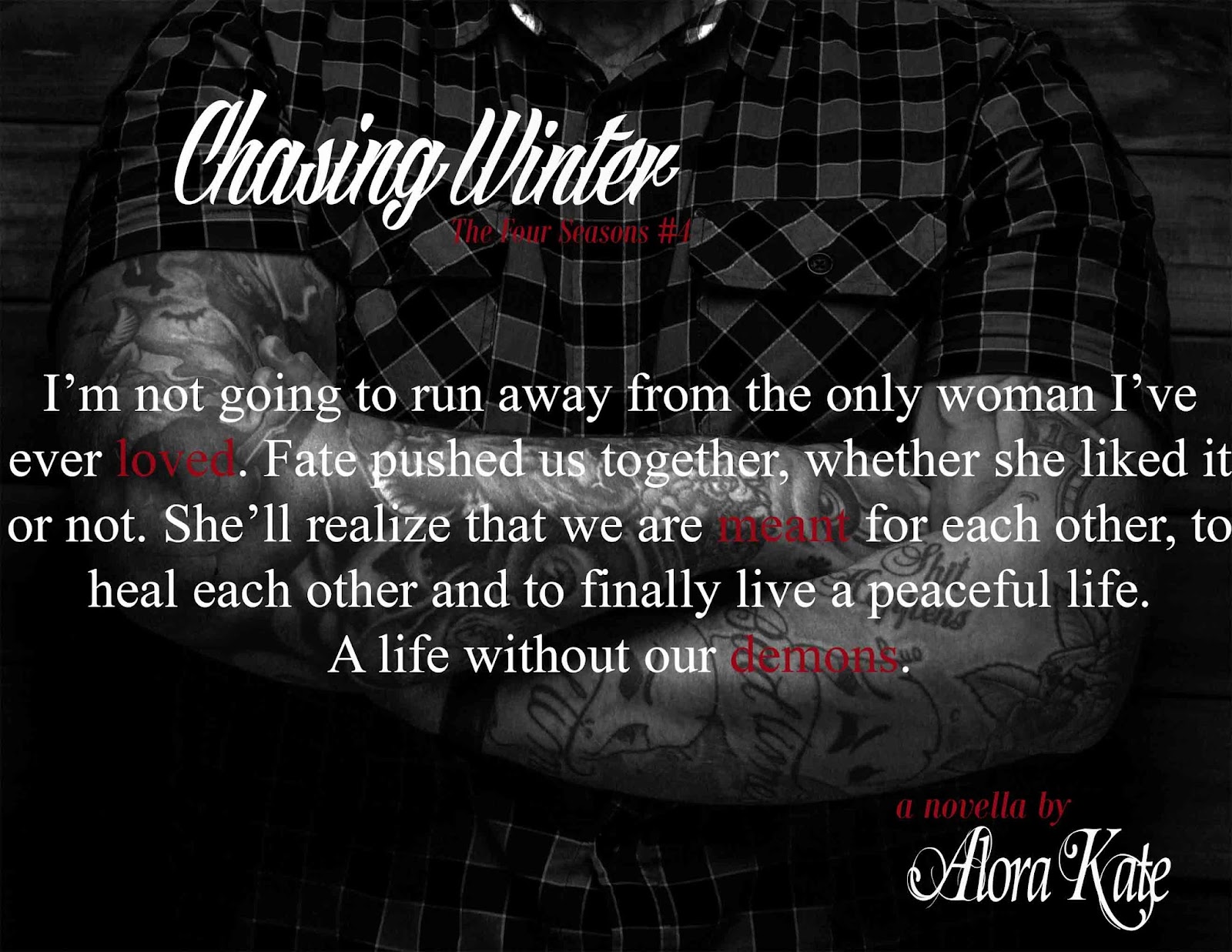 About Alora Kate:
“I hear voices in my head and I love that it’s totally okay.” – Alora Kate
Alora Kate – Pen Name
There are many reasons why she chooses to use a Pen Name. She battled with the idea but in the end, it’s a dedication. Alora Kate is a dedication to someone special who left this world way too soon.
She doesn’t write to get rich, or famous. She does it because she loves it. If only ten people bought her book and loved it, then it was worth her time to write it. She loves to share her crazy world and characters with you.
She is a single mom of a very active 3yrs old. He is her whole world, and life wasn’t complete until he came along. She is also a full-time college student studying photography and graphic design.
Where to find Alora Kate:
Facebook: https://www.facebook.com/authoralorakate
Amazon: http://goo.gl/F4iTf2
Goodreads: http://goo.gl/zxRi4z
Twitter: http://goo.gl/J6aWrh

Lee had never known anything but running and hiding from the ‘mafia’ looking for her Uncle Sam. The last four years had been great, however. They’d settled in Washington close to her other Uncle Ahren and his wife Beth. She was finally home.

All seems to be going well in her life. Why then is she attracted to the man stalking her? The man who claims she is some kind of angel and has great powers. Shouldn’t she run to Sam and tell him everything? Instead she trusts the man named Chael.
When the war threatens to erupt on Earth, Chael has no choice. He has to tell Lee the truth about who she is, and take her to the one place where she is safe…that is…until she’s stolen again. Chael must track her down and fight the war between the rogue Fallen and Fallen…will they succeed before Hell’s demons are unleashed on the world?
Sacrifices must be made. Will Chael save Lee before it’s too late?

Ace is a reaper for Purgatory; calming lost souls while they await their final judgment. His latest Death Report was a job like any other, until he interrupts the demons that have been unleashed to kill her. She was just meant to be a job, but she turned out to be so much more.

Faye was unprepared for Ace’s entry into her life. Never before had she met anyone who could make her heart skip a beat even as he froze it with fear. Now, not only had he saved her from demons from Hell, he was trying to tell her she wasn’t human.
A war has begun between the Fallen and Archangels. The winner gets power over all realms. Has the world’s Fate been determined before Faye’s true destiny can begin?
Amazon | Amazon UK | Amazon AU | iBooks | Kobo | Nook

Kate was born and raised in Sydney, Australia with her two parents and two brothers. She was always a dreamer even as a teen when she would dream of the moment, while in Maths class, her knight in shining armour would come and rescue her from the tedious learnings of algebra and Pythagoras’ theorem. It was at that moment, she realised that if she wanted her knight to come through the door, she’d need to dream him up.
She’s been doing it ever since.
In 2014, she migrated north to the Central Coast of NSW where she lives with her most treasured items: laptop, high heels and countless meerkat figurines.
Fate, is the first novel written by Kate and the first in the Fallen from Grace series

Release Blitz: Handle Me with Care by Helen J Rolfe

Evan Quinn is serially single, yet when he meets Maddie he feels an instant connection, so much so that he confesses on their first date that he may have testicular cancer. Was it a mistake to tell her? He wants Maddie more than he has ever wanted any other woman. But he doesn’t want her pity.

With the odds stacked against them both, finding love won’t be easy. But beneath the Australian sun, a Happy Ever After could be worth fighting for.

Links to Buy
AMAZON US / UK

Helen J. Rolfe writes uplifting, contemporary fiction with characters to relate to and fall in love with.

Before she started writing books, Helen J.Rolfe worked in I.T. until she came to her senses and studied journalism and writing. She wrote articles for Women’s Health & Fitness magazines as well as newsletter content and media releases for a not-for-profit organisation. In 2011 the fiction bug bit and Helen has been writing fiction ever since.

After fourteen years of calling Australia home, Helen has returned to the UK with her husband and two children.